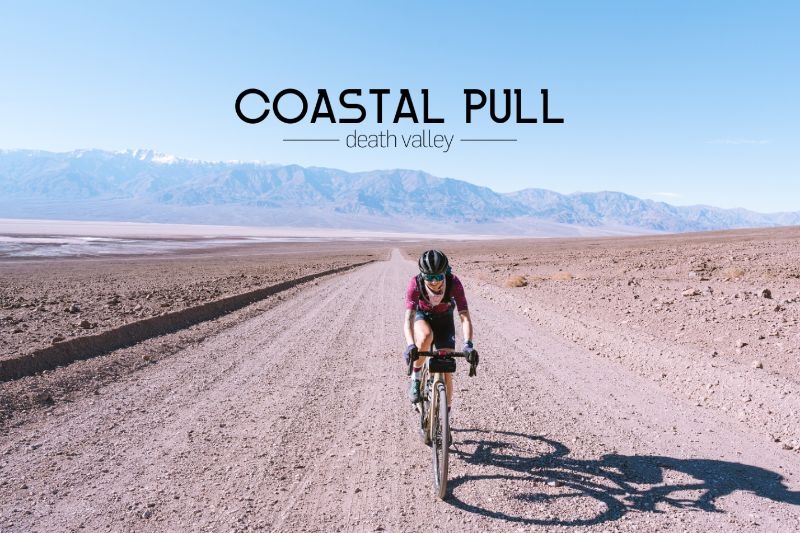 Gold! The things we do for what we find so valuable. Death Valley needs no introduction, standing as one of the pinnacles of National Parks in the United States since 1994, but made a national monument since before most of us were born...1933. The California Gold Rush of the mid-1800s (remember those 49’ers?) pulled countless eager souls from the East, on an unknown journey westward, loaded on wooden wheels and on foot. Some made the not so fortunate choice to take a shortcut over the now infamous Funeral Mountains and into Badwater Basin. Months of desolate isolation and some casualties later, they trekked out and said, “Good-bye Death Valley.” 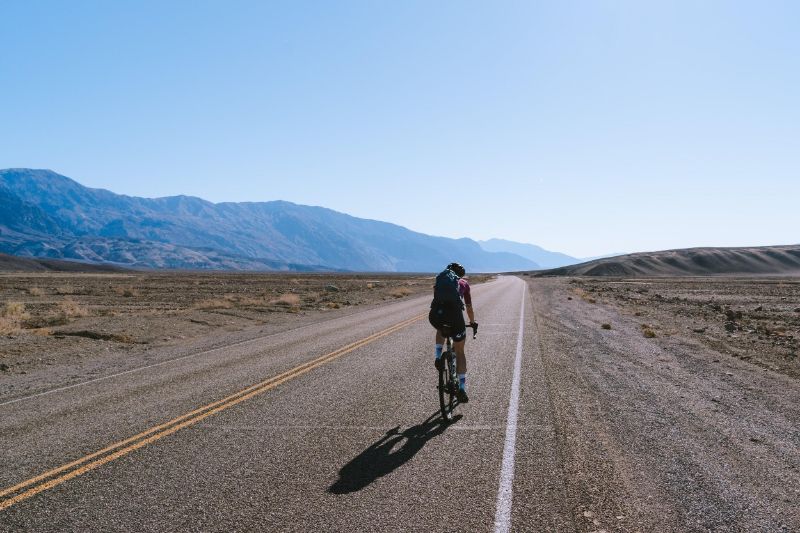 We all know now that Gravel is the new Gold. The things we do for that sweet, sweet gravel. Provisions checklist: 2 Pivot Vaults, SRAM Force EtapAXS, Zipp 30 Course and 303 Firecrest on 40mm filetread, Science in Sport nutrition, navigation and suffer-data by Wahoo Fitness, lids and kicks by Giro Cycling, and fresh threads by Eliel Cycling. SK Racing Team is about to do Death Valley. Although a far drive from the ocean smells and coastal breezes of Big Sur (see our previous ride report), Death Valley offers that same intensity of magic. Paved and gravel journeys intertwine and snake across more miles than you can fathom, and it’s easy to see how souls can become lost in this massive expanse.

It was our first visit to the desert kingdom, and we played the part of basic tourist on Day 1. And it was amazing! Pulling up to Furnace Creek Visitors Center is quite juxtaposed to the earth-scorched scenes you drive through to reach it. Littered with palm trees and fully established resort homes, you can spend an oasis style vacation here. We mapped out an out-and-back with some side mini-quests for our first ride. Headed south in the main artery of Hwy 190 is Badwater Basin - the lowest point in North America. It was a bit sluggish riding the Highway on the 40s, but we had some gravel planned for later. Once you leave Furnace Creek, it’s wide open, and you feel the isolation that early settlers must have experienced. Passing miles of misshapen hillsides, pockmarked valley floors with what look like world’s worst loofah and salt bath bombs, you’re transported through history.

Reaching Badwater is not really what you may expect, but it makes perfect sense. The mountain range is rising, and the lakebed is sinking. There’s a massive cliffside to one side, and the expanse of the salt valley to the other. We had expected to arrive in it but arrived next to it. But let’s get to it...the view is stunning across a brilliant white horizon, and tiny silhouettes of visitors dance in the heat waves at its center. And it’s truly epic. 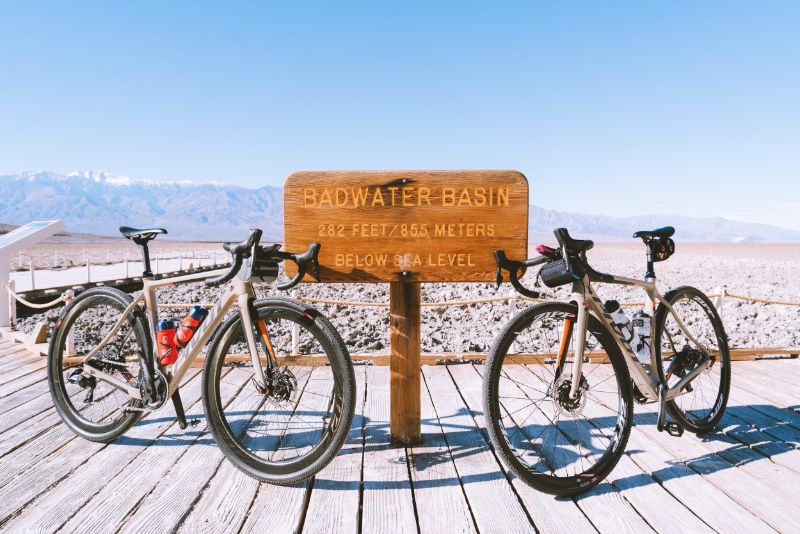 There is a gravel trail along the west side of the valley, but it didn’t appear to lead to any landmark destinations, so we opted to check out a “little” gravel off-shoot on the ride back to Furnace Creek. Natural Bridge climb is all gravel and takes you on a gentle slope until it rips your legs off. 7% for the first half, then 10% for half a mile, then 12% for a quarter-mile...on washboard loose gravel. There were smiles. Sweaty, sweaty smiles. Loaded down with two bottles and 2.5 liters on the back (because Death Valley), it’s enough to make the below-sea-level oxygen assist feel weak. The last ⅓ mile is bike-banned, so we hoofed it on foot to see the bridge. Would recommend this sight in the afternoon to allow for better light in the canyon. 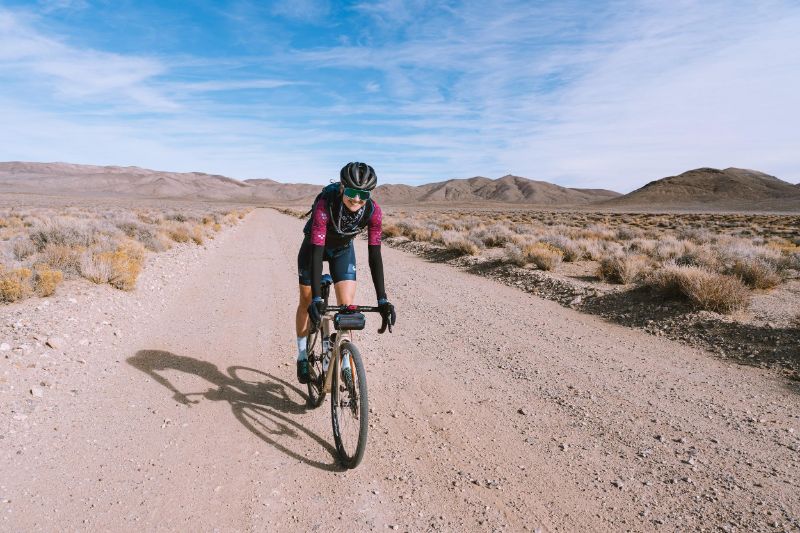 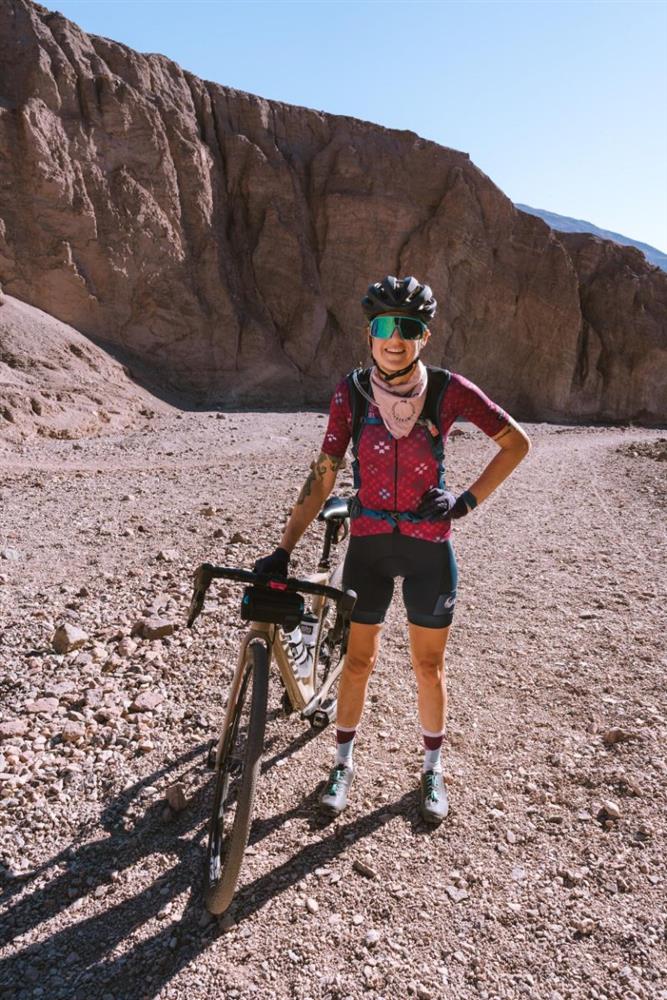 After exploring another geological oddity, The Devil’s Golf Course, the nine-mile Artists Drive came next. Riding along the valley reminded us of California and the Sierras. There are reasons to be in the valley, but everyone wants to escape to the hills. Artist’s Drive is a one-way paved road that is the perfect marriage between a modern road-way and ancient landscapes. It feels like you are on a colonized Mars. How we are so fortunate to have this to play on is astounding. Our bodies felt as twisted as the road by the top. The same slope style as Natural Bridge, but on pavement. Yet the jaw-dropping views made up for any pain, with painted rocks, epic crater-like dimples, and towering peaks. 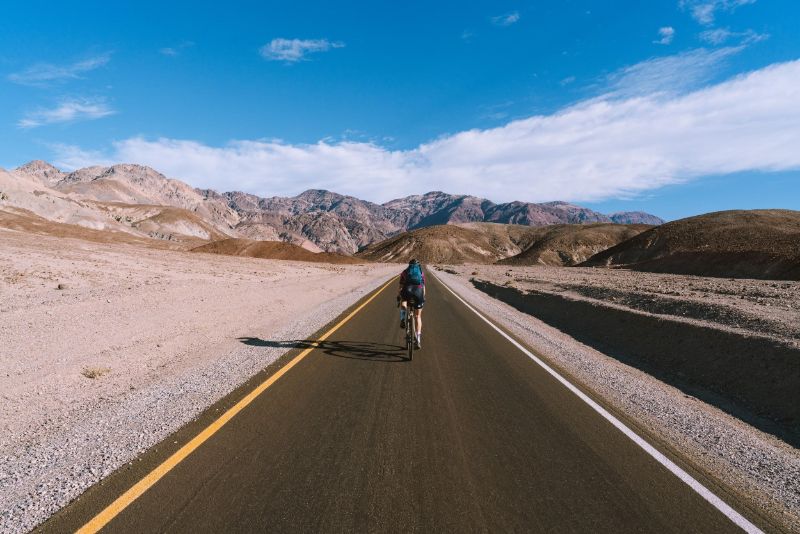 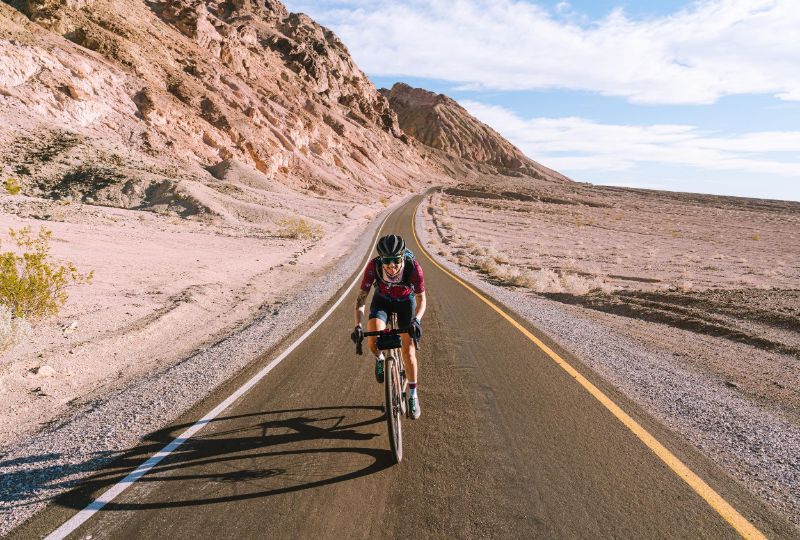 Coming down from the Artist’s Pallete formation, made by the earth’s most colorful chemists, is a curvy one-way descent that is an outright blast. The evening views of the valley and the long shadow trailing behind you are gifts from the cycling gods. It’s a memory board kinda thing (if you’re into that). Evening comes early in Death Valley, and with the sun falling behind the peaks of the Panamint Range much sooner than on the coast, we packed it up and dreamt of what Day 2 would bring. 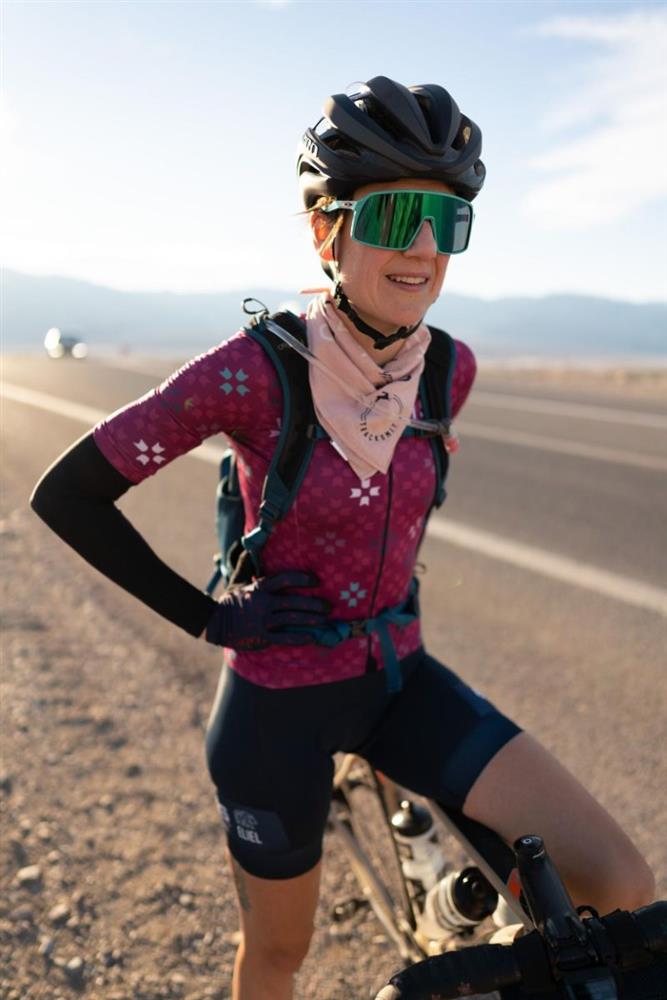 Day 1 was more about Death Valley itself, who it was, and how it came to be. Day 2 brought a far different flavor to the ride. “Mines and Mills” was the theme for the ride. How did early explorers see value in this land and how did they live in it? Our ride began at the Emigrant Campground, which is near the end of the primary descent off the Panamint Range. If you were hoping to ease into this ride, it won’t happen - it’s 9 miles of 6% average on the pavement right from the gate. But it’s one of those desirable escapist feelings that adventure seekers crave. When all you’ve done is climb for the last 9 miles, you know the destination will be worth it. 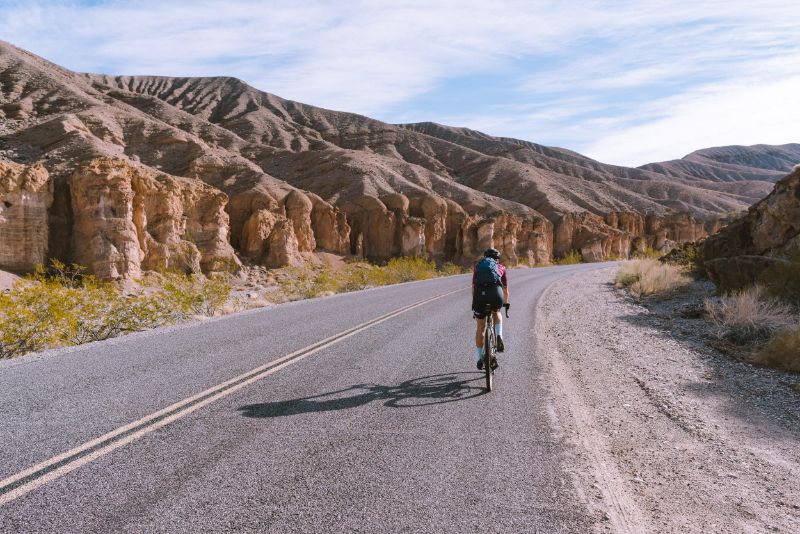 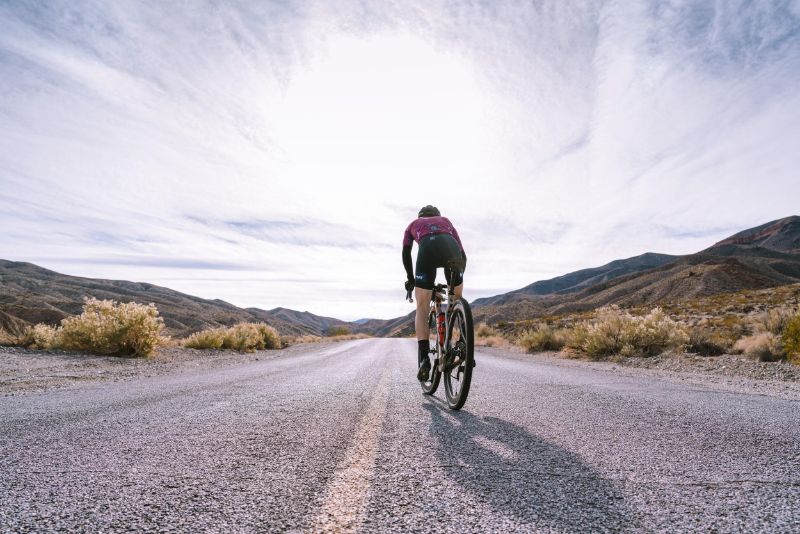 A few gels later the climb releases you onto a high-desert plain (~4,700’) near the ghost towns of Harrisburg and Skidoo, and finally some gravel! Passing by prospector homesites that are nearing a century-old while riding a bicycle is a strange sensation. You feel akin to the adventurous and determined mindset that they must have had, but also foreign to their struggles. How hard they worked the lands for decades seems to immediately eclipse any lactate burn the legs might have at this point.

Our goal was to reach Aguereberry Point, which offers breathtaking views of the range, but it was another 2,000’ vertical from the Eureka Mine, getting overcast, windy, cold...not the best conditions for a future 13-mile descent. And we still wanted to do Skidoo. So, we layered up after exploring a mine (which is now home to protected bats instead of gold) and tackled the Skidoo gravel road. 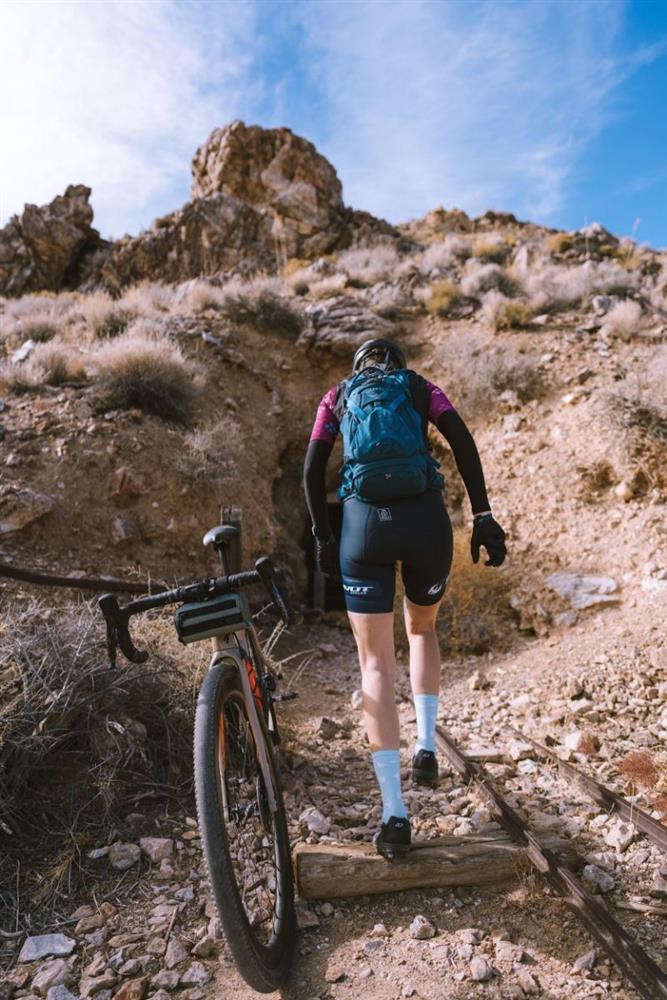 Photo by Max Polin: Eureka Mine 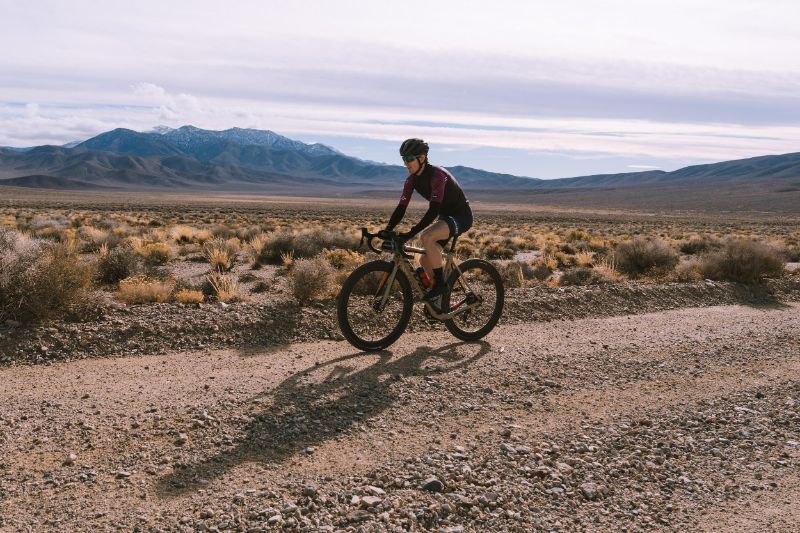 Skidoo has a fascinating history: accidentally found in the fog, it produced ~1.5 million in gold, and was home to the only recorded hanging in Death Valley. It’s a 9-mile gravel ride from the pavement to the Skidoo townsite and mill. For being out in the middle of nowhere, it’s good gravel. Climbing up past numerous skeletons of old buildings, the road leads you to some massive valley overlooks and more of that escapist mindset. 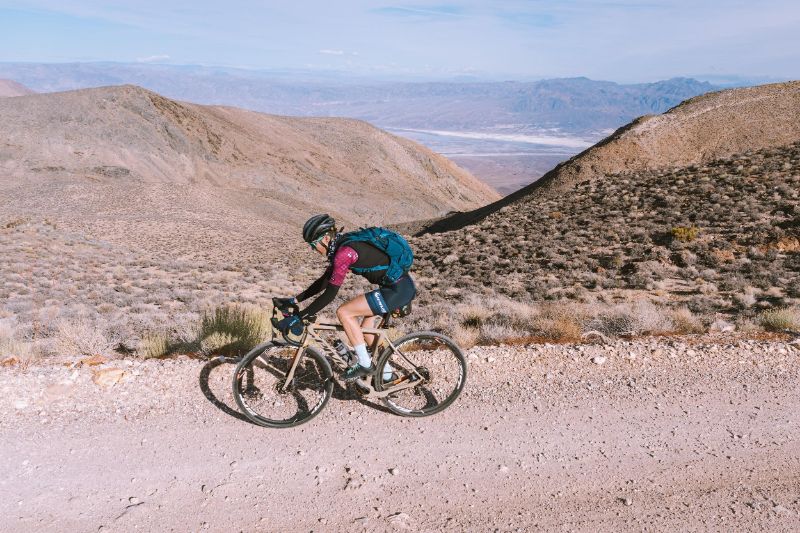 There’s nothing left of the town of Skidoo (which had several hundred citizens at one point). Just a few piles of rusted food cans, other fragments of metal, and some barred entrances into holes in the hillsides. If you continue just a bit further, the preserved Skidoo Mill stands impressively over a stunning backdrop. Clung to the hillside, it really feels like a watcher of the land and time. There is an active preservation effort of it to this day (as we encountered preservation analysts surveying its integrity). Taking a stroll to the top of the mill is completely worth it. The views are indescribable, and they make the ride that more memorable. 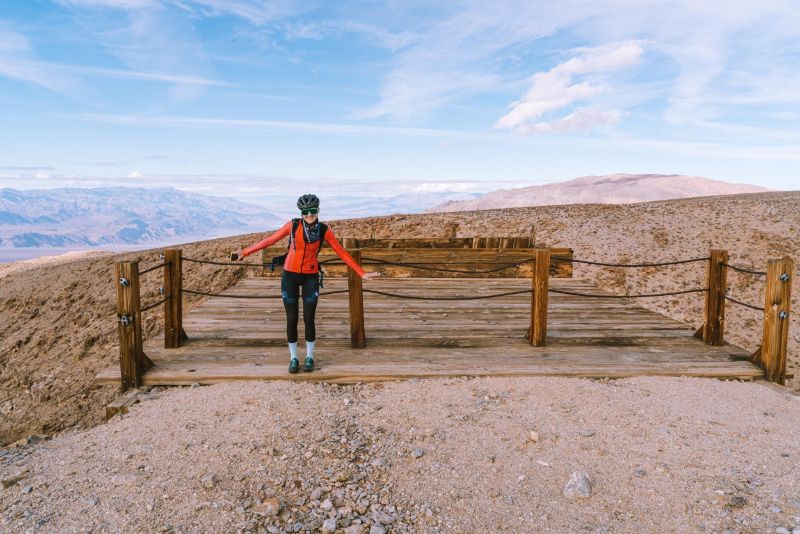 It was getting into the 30s with the wind chill, and we braced for the descent back to the car. Full of smiles, satisfying our thirst for adventure. Riding down from Skidoo is an interesting feeling, and the connections you might feel to the land can be intense. It’s easy to see how people could have settled there, and if we were to build a gravel training campsite, it would be there. It’s truly gold. 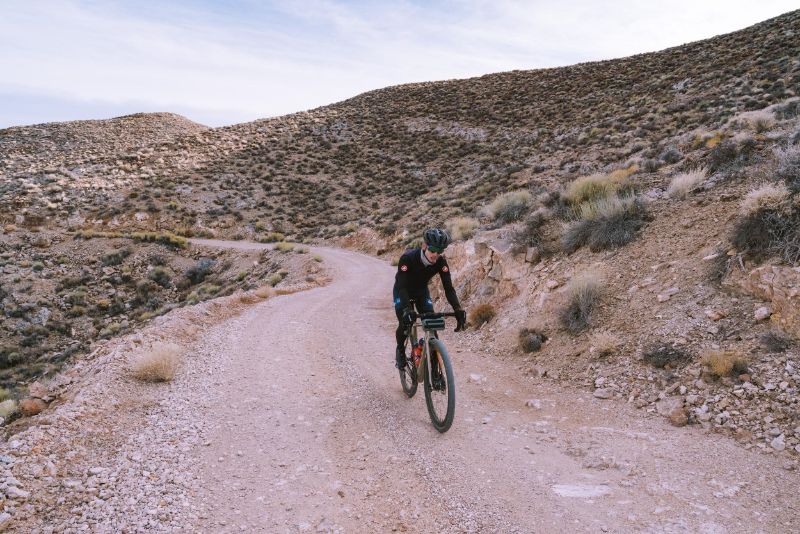 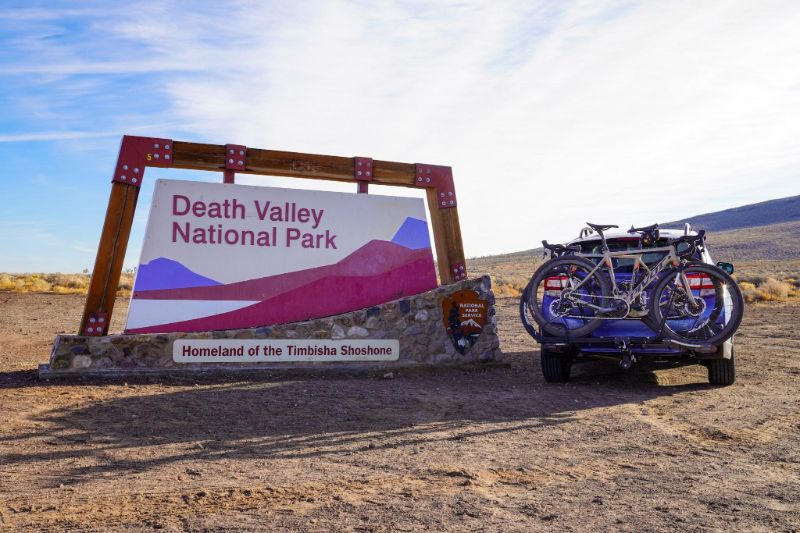