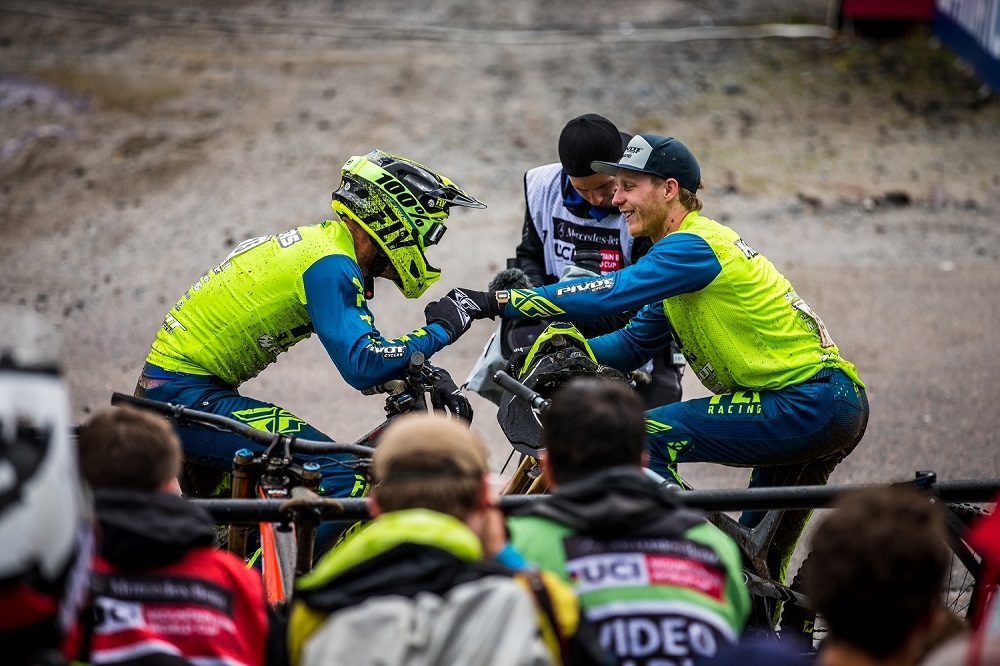 Fort William, in the Scottish Highlands, hosted the second round of the 2019 UCI Downhill World Cup. The classic venue and track have hosted a World Cup each year for the last 15, becoming a firm favorite with fans and riders.

The track walk set the tone for the weekend with umbrellas and rain jackets - the accessories of choice. As Fort William has been raced for so many years, the riders are now looking for the smallest margins to gain them any amount of time available. Lots of time was taken on the new section, assessing each line, spotting hidden rocks and roots while discussing the best a way to tackle the challenge.

More rain and grey clouds greeted the riders on Friday for training. Emilie was feeling strong after a few weeks of physio and gym work on her shoulder. The long physical track with a few super steep and technical sections doesn’t match her strengths, but the sloppy muddy conditions were right up her alley.

The new section was proving difficult to ride at speed with the soft ground cutting up into deep ruts and the mud covering the rocks and roots. Surprisingly, the rain actually made some of the top corners grippier, keeping the dust down and packing the dirt allowing the tires to cut in and grip rather than slide.

Eddie has always ridden well at Fort William with the long track playing into his enduro strengths as well as downhill speed. He was looking fast in the wet and muddy conditions enjoying slipping around and finding the grip.

Matt and Bernard were riding hard in training. Riding one behind the other and testing lines - both were getting confident with the conditions. Bernard was up to pace quickly and finished a successful day training off with a top 5 time in timed training, a great sign for the weekend ahead.

A gap in the wet weather was a huge relief for the team come qualification day. A drying track was riding faster and faster with less standing water, improving visibility and letting the rider push even harder. The drying track was much welcomed, but the increase in wind wasn’t, the exposed nature of the track meant high winds were a particular challenge and frustratingly unpredictable.3

For the first time in years, Emilie wasn’t protected and guaranteed a spot in the finals following her injury at round one. She had a few mistakes in her run, but worked hard to keep speeds high in the windy motorway section. Emilie was pleased with the 6th fastest qualifying run and into the main event.

After a strong first round and top 20 overall standing, Eddie was a protected rider. Not worrying about qualification, Eddie could focus on his lines and push hard on his run knowing a mistake or mechanical wouldn’t end his weekend early.  With a clean run, Eddie crossed the line with a brilliant 8th fastest time!

Bernard dropped in not far behind Eddie, enjoying the track and hopping the big rocks and holes to keep his speed high. He was also on a great run and feeling good, posting a fantastic time for 10th.

Matt was looking good on track all week and felt the bike was running perfectly. Charging in the top section, he clipped a pedal on one of the many rocks littering the track. Blowing both feet off the pedals he rode the top tube for a while but his cat-like reflexes stopped him from crashing hard. Losing valuable time, he set off knowing he had time to make up. After a very nervous wait Matt qualified in 60th, a fastest final split was just enough to squeeze him into the main event on Sunday.

The team woke up to more rain on finals morning. Thick fog covered the top of the track and there was limited visibility making the high-speed sections even more hair-raising.

Emilie was first rider to tackle the track and wet conditions and was feeling confident after a strong qualifying run. Carrying good speed and finding the little grip that was on offer, she was posting top 3 split times. Taking risks and hitting a fast inside line that no other female rider was hitting, she landed in a compression that stopped the bike instantly. Throwing her clean over the bars and into the muddy rocks.

Landing on her shoulder she previously injured, Emilie tried to remount and continue but couldn’t safely keep riding and was forced to pull out.

Matt was the first elite man to race the track. Flying down in the rain and enjoying the thousands of fans lining the whole track, he put down a very strong time. Ending strongly on the motorway section he used the last of his energy keeping the bike low on the jumps, pumping and peddling wherever possible.

A long wait for Bernard and Eddie in the final 10 riders was made even tenser as Matt held onto his spot on the hot seat for over an hour. With 15 riders to go he was guaranteed a top 20 finish.

Bernard dropped in like he meant business, 10th fastest at the first split and then fastest through the ‘pinball’ rock garden section saw him clawing back time. Losing traction in the woods he unclipped and dabbed but didn’t lose too much time. His speed and style came through on the motorway section as he was flying into the finish area. Posting the 3rd fastest time, Bernard was into the hotseat to watch Eddie come down one rider later.

Eddie came out the gate firing and was over one second up at the first split. He held the advantage all the way through the fast, open and rocky top section with the 29er wheels rolling over the roughest of terrain. Coming into the woods, Eddie stood up in the same turn Bernard lost traction in. He didn't lose too much time, but the mistake caused him to ride the next few sections tight and drop some vital seconds. A classily exciting run had everyone on the edge of their seat but crossing the line in 4th, just ahead of Bernard.

As the final few riders came down, the final standings were settled with Eddie finishing in 10th, Bernard in 11th and Matt in a fantastic 16th

With all the Pivot Factory Racing men in the top 20, it was a brilliant weekend of racing. A downer on the weekend was Emilie’s crash, but it was good to see her speed is there and she will be back in one week's time pushing hard in Leogang for the next round of the UCI Downhill World Cup.