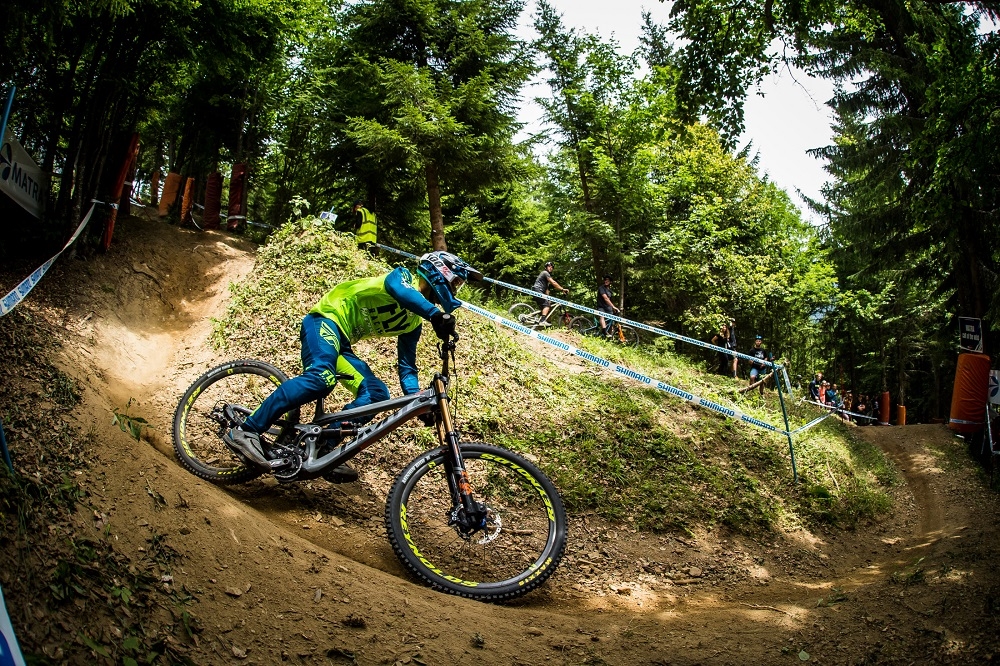 After a hugely successful weekend racing across Downhill and Enduro, the full Pivot Factory Racing Team was back together and raring to go at round 5 of the UCI Downhill Mountain Biking World Cup in Les Gets.

With all the riders and mechanics spending plenty of time in Les Gets and Morzine over the years, the race had a home-away-from-home feel and there was a good atmosphere in the pits with fans. Riders, fans and the media kept coming to congratulate Eddie on his win the previous weekend.

The team has raced the track here in previous years at the Crankworx event and knew what to expect. Fast, open, grassy turns at the top of track would see insanely fast speeds, but riders would have to keep their wits about them with some awkward off-camber corners that required riders to slow up and hold high lines.

The track then disappeared into the woods for the most technical section with fast drops, berms and some steep shoots. Eddie described this section like a bobsled track. A final few drops and jumps on wide-open ski piste fired the rider into a big finish area.

A dry and dusty track would cut up throughout the weekend and develop holes and ruts in the open sections. Rain would make the ski piste and off cambers very challenging. All of the riders hoping for mixed forecasts were wrong and the weekend was dry and fast.

Everyone was eager to get up the hill and attack the track. As normal, Emilie was first up and gave the boys some information on the lines, grip levels, and tire choice.

The track was cutting up with ruts forming in the open grassy turns, helping the riders hold their line and speed. Without too much line choice, riders were up to speed quickly and flying down the track. Emilie worked with her mechanic to alter the bike set-up and her position to suit a very different style of track than last weekend in Andorra.

By the time qualification rolled around, the track developed big holes as expected. With few line choices and without being overly technical, a good time on this track was down to commitment on the high-speed, open turns, and pinpoint accuracy in the wooded section. Times were going to be tight, and with consistent dry weather all weekend, there was no hiding.

Emilie was our first rider to tackle the course. Happy with her run through the woods, she crossed the line in 4th. A small mistake on one of the super-fast open corners caused her to unclip and struggle to clip back in. Finishing up in 10th, Emilie was a little disappointed with her speed, but knew where to cut out mistakes and push harder for finals.

Bernard came flying into the finish area with the timing screen green on all sections! Posting the fastest time of the day so far, he was happy with a fast run, but knew he lost a small amount of time in the final two corners. Finishing off in 7th, it was a brilliant result and gave him even more confidence for Saturday.

Eddie was up to speed on his downhill bike and loving the grass corners. A loose run and a few mistakes cost him some time, but qualifying in 19th shows how quickly he adapted from the Enduro race mindset to the downhill mindset.

Matt was feeling the nerves for qualification. With such a fast track and tight times, any small mistake could put anyone out the running for finals. Crossing the line in 49th, he knew he had ridden too tight and left too much time on track. A nervous wait as the next riders came down saw him slip into 69th.

Matt was gutted to miss the finals after riding so well at the Enduro and in training. With only the top 60 riders qualifying for the finals and the standard of racing so high, qualifying is becoming more and more of a challenge.

Early morning saw the town getting busy; a large crowd from the previous day’s qualifying was expected to be followed by a huge crowd for the finals.

Emilie was pushing hard to make up some time on the high speed track. Aero tucking on the fast straights and breaking as late as possible, her run was two seconds better than her qualification. A small mistake in the wooded section of track saw her stall and lose a little bit of time. Crossing the line in 3rd, Emilie enjoyed some time in the hot seat before her time was bettered, eventually finishing 12th.

Eddie set off fast and, as usual, was up on the first split times. Pushing hard and drifting around the open, grass corners, Eddie came into the packed finish area surrounded by fans. He crossed the line in 5th, happy with a loose run and getting up to speed on the downhill bike. Eventually finishing 11th, Eddie continues his good run of results and maintains his top-20 position in the overall World Cup standings, despite missing a round.

After a great qualifying run, Bernard was one of the last riders to tackle the 2.3 km track. Looking fast on the big screen, Bernard was putting in the effort and pushing hard. Drifting wide on one of the long, loose corners, and a slight mistake in the woods, cost him a couple of seconds. With the racing so tight, the small mistakes cost him a few positions. Finishing in 19th, he was frustrated not to convert a good qualifying result into a good race day result.

It was great to have the full team back together for fun and busy week in Les Gets. With two weeks off before World Cup racing returns, the team will be riding and training in the Alps, ready to attack Val di Sole.

As always, a huge thanks to everyone for the support along the way to make these weekends of racing possible!